Through a collaboration with the University of Murcia I participated in this project, which focuses on Mediterranean ephemeral channels. The project was performed at a range of temporal and spatial scales, which included field surveys, analysis of remote sensing data and modelling. The impact of climate change was analysed, focusing on morphological channel processes, such as incision, narrowing and plant colonization. I contributed with a study on the impact of climate change on soil erosion in the Alta Mula catchment. Here, we applied an ensemble of five continuous process-based soil erosion models to account for model uncertainty under climate change. The model code is available through GitHub. 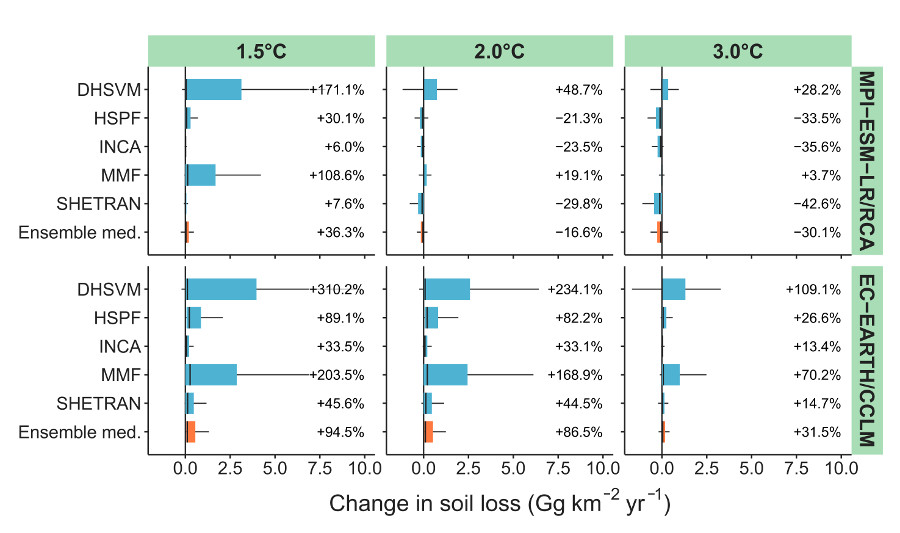 Evaluating hillslope-channel connectivity from physically-based modeling at the event scale in a dryland catchment, southern Spain (under review)

Evaluating hillslope-channel connectivity from physically-based modeling at the event scale in a dryland catchment, southern Spain (under review)

Dimensionless morphological ratios (DMR) generally are used in systemic proposals for stream classification and river restoration projects. Often, such morphometric parameters, including field data from channel cross sections, develop into a template for a given geomorphic reference site. In this study, high-resolution Digital Terrain Models (HRDTMs), combined with orthophotographs from 2018 and ground-based surveys, were used to analyze the spatial variability of DMR in a semi-arid ephemeral stream subject to changes in stream power under bankfull conditions. In particular, a channel reach of 2.7 km in length along the Upper Mula stream in southeastern Spain was chosen to test the relationships between the two types of variables. Rosgen’s DMR (width to depth ratio, entrenchment ratio, bank height ratio) and hydraulic data at bankfull stage (flow velocity, Froude number, shear stress, mean stream power and energy gradient, among others) were calculated by 1D hydrodynamic modeling and HRDTMs prior entry of field information. The resulting maps allowed comparison of stream power with DMR in relation to the channel stretch class and bed stability. The results showed similar spatial patterns for the width to depth ratio and the bank height ratio. The average values estimated in bend stretches were lower than along straight and slightly sinuous stretches and very similar to those of sub-reaches from the inflection point to the meander bend apex. However, the entrenchment ratio followed a different pattern, according to which the straight and slightly sinuous stretches were the most entrenched and the bend stretches presented a more moderate average entrenchment ratio. In addition, the energy balance and power gradient also experienced spatial variations in relation to the bed stability and DMR. Only in highly incised sub-reaches were such relationships not significant. The lack of a significant correlation between excess energy and bank height ratio or width to depth ratio over short lag distances was also verified, regardless of the affected bedforms. An ANOVA showed important differences between the straight and slightly sinuous stretches and bend stretches, which were strongly influenced by the incision and entrenchment ratios and the maximum bankfull depth. 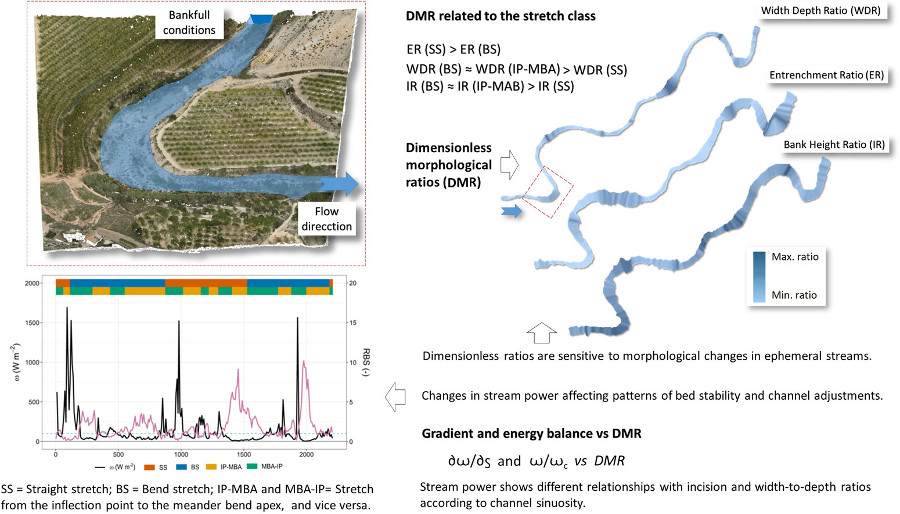